The Night the Waters Roared 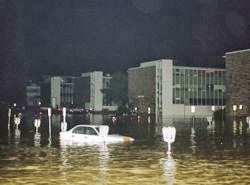 In light of the Colorado floods today, it reminds me of one of the most awesome God-stories in my life. It happened in the same location as the current flooding.

One of those beautiful 1997 summer days in the foothills of the Rocky Mountains had faded into a light rain as 3000 teens made their way into Moby Arena on the campus of Colorado State University. Moby Arena is a huge windowless concrete structure seating 8000.

As the worship finished, I stood to deliver the evening message that I believed God had originated in my spirit for this group. I preached passionately and although I was not scheduled to do so, I gave an altar call. Students began to respond.

At that point I felt impressed strongly by the Spirit to give a clearer, more urgent call for teens to come to the front and surrender their lives to Christ. I hesitated as we were far past the scheduled dismissal time. I sensed the nudging of God again. At that point I told them to keep coming until God was finished with what he wanted to do.

We had no clue what was transpiring just outside the strong concrete walls. As the altar call took place an eight foot wall of water roared through campus of Colorado State leaving $200 million of damage and five dead people behind.

The fact is had we dismissed these teens at the scheduled time, they would have been directly in the path of the flood. Tens, if not hundreds of people would have died. Instead we were in the safety of the stadium. We spent the night in that secure environment while the flood raged outside.

The next morning we emerged and many of the teens spent the next day helping the devastated community of Fort Collins clean up from the flash flood.

That story always gives me goose bumps about so many things: The leading of the Spirit, the safety we have in Christ (our ark of refuge), the fragility of life and the sovereignty of God.

Posted by Larry Walkemeyer at 6:19 PM